On Wednesday, I read poems at the Welsh Assembly to launch the Weeping Window poppy exhibition to mark the national centenary of remembrance of those who sacrificed in World War One. 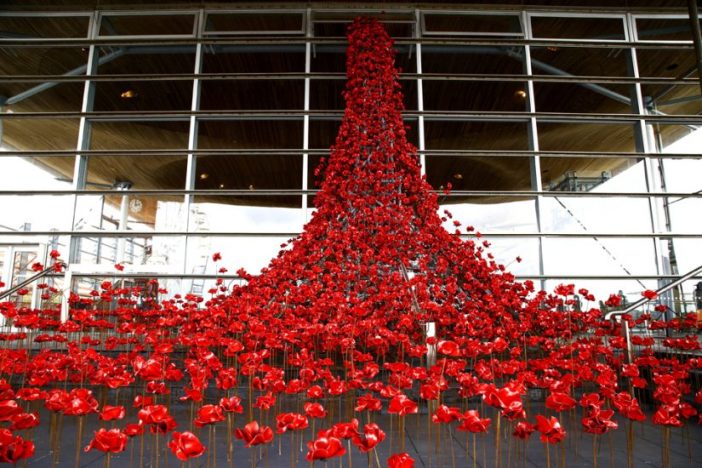 I was commissioned by the Welsh government to write a poem in response to the exhibition. I sat in the foyer watching the poppies being assembled; it was quite moving, observing the care with which they were handled and placed.

There were so many poems I wanted to share with the audience on Monday, but time allowed for only three. I read Hedd Wyn’s ‘Y Blotyn Du’ and Ifor ap Glyn’s ‘Reading his shirt’ which is what soldiers in the trenches called picking the lice from their clothing. I remembered my grandmother’s book of Whittier’s poetry, given to her in 1918 to commemorate those who served in the war. Her brother George Hunt, one of these men. The poem I wrote was in response to Wilfrid Wilson Gibson’s poem which because of its simplicity, its human-ness really impacted me:

I WONDER if the old cow died or not.
Gey bad she was the night I left, and sick.
Dick reckoned she would mend. He knows a lot–
At least he fancies so himself, does Dick.Dick knows a lot. But maybe I did wrong
To leave the cow to him, and come away.
Over and over like a silly song
These words keep bumming in my head all day.

And all I think of, as I face the foe
And take my lucky chance of being shot,
Is this — that if I’m hit, I’ll never know
Till Doomsday if the old cow died or not.

In my poem, I imagined this soldier, long dead, finding his way back to his valley where his cows were. What have we learned? What would those soldiers who gave their lives think of the way we live, the way we forget the price of war.

‘And Have we Done with War at Last?’

(After ‘The Question’ by Wilfrid Wilson Gibson)

Home at last, the headstoned soldier,
finds all manner of things changed, unchanged,
the kissing gate grown over, the capel closed
and his love who pulled petals from daisies
–in the cemetery, cold.

His bwthyn bach where pig meat hung from beams,
the crackle of hearth and kettle song—all echo in him deep,
and hurt in their being gone.

The field choca-block with houses now where his cows once grazed,
oh how he had worried over their keeping;
he leaves, for good, this once-his village;
and fills the valley with his weeping.

In Cardiff the poppies have come
and see, he’s one amongst them,
he knows too well their crimson hues and their endless tangles of iron.

These bold blossoms spill like blood from cedar beams above;
let them flow into the hearts and hands of those who govern
so no more poppies will be plucked
with:
War?
War no more.
War?

Title: ‘And Have we Done with War at Last?’ from Robert Graves’ poem ‘Two Fusiliers’

Here’s a link to the video of my reading.