In mid-September 2016, I picked some damsons from the tree at Llwyn Celyn the medieval house where I am poet-in-residence. 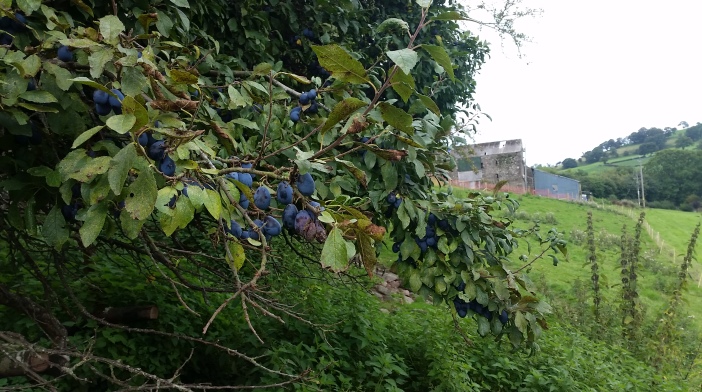 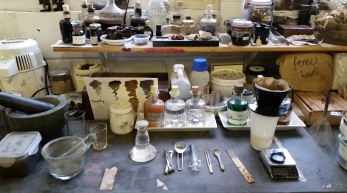 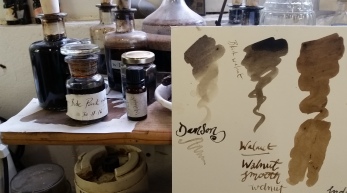 The damsons still held the scent of summer, as soon as we boiled them, there was an expectation of jam dense in the air. 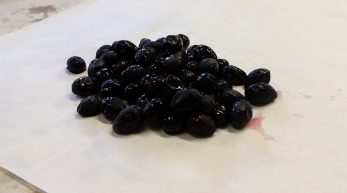 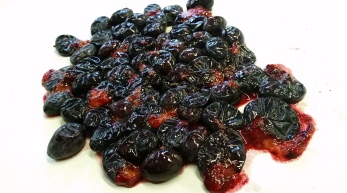 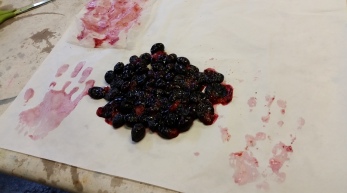 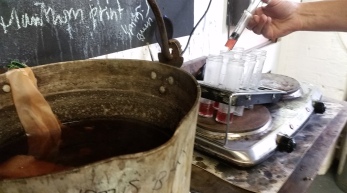 I learned that the ink’s colour depends on the acid used as mordant and the tannins and so we experimented. Incredible range of tones from the same source. 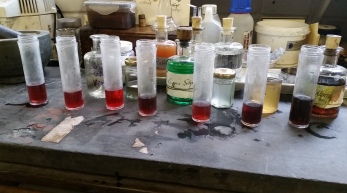 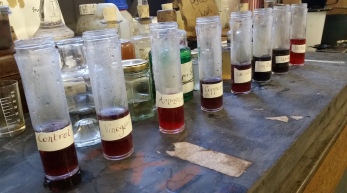 I felt as if I was back in the chem lab in school, experimenting, mixing witch-like. It was good to be stirring a blood-red liquid, spoon instead of pen, aluminium pan instead of page.

I wondered if the generations of women from the house had done this too, made dye, ink? Perhaps with fruit from the same tree?

Cath is an alchemist, she has jars and jars of fruits, nut shells, flowers, leaves, even rust-making objects steeped in an ever-reddening fluid like small specimens in formaldehyde. 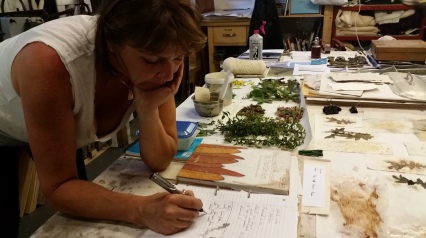 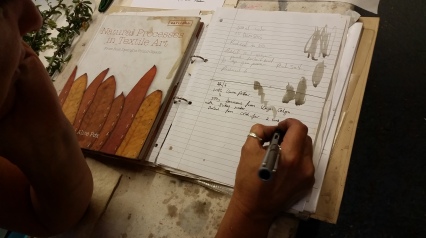 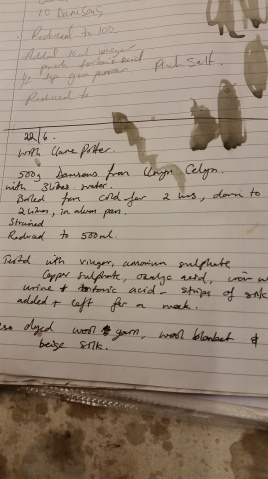 The ink isn’t quite ready, what to do with it when it is? I want to write a poem for the house, a sort of witch’s bottle in words, a sort of jaw-bone or hobnailed boot of words like those found in the eaves that had been placed centuries ago when the house was built. To stave off evil spirits, to invite good things.

On discovering the damsons last year, I wrote my intention to make ink:

We, in the threshing barn snapped back
from Gill’s Nude Girl with Hair, by a turbulent
thwack of the tarp at the doorway.
What’s it keeping out as we wander
wonder Wordsworthian, learning landscape
through art, learning place from
the tip of this speaker’s tongue,
the hiss and hum of the projector
(and the bats quiet in the rafters,
their stories still wing-tucked)?

Beyond the barn in Llwyn Celyn’s demesne,
in the once-grounds by the stone wall being rebuilt
the damascene tree, damson
plums, drupaceous, testicular,
purple bold against its green,
skins bulging with unmade ink;

the dyer gathers her trug, will boil,
release autumnal colours from slumber
—will stain her fingers, the page.