Hard to believe it is December. When I left Pontypridd in the morning, it was raining and cold. But as soon as I arrived at Llwyn Celyn, I had to remove a coat and two thermal tops. Despite a hood of mist on the Skirrid mountain, the sun shone allowing me the luxury of sitting outside and looking over the valley while I collected my thoughts. 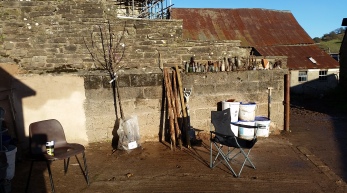 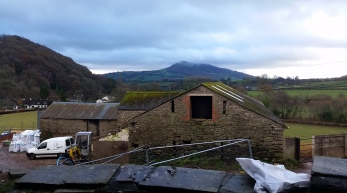 It’s only a few weeks since I visited last so I was stunned by the amount of progress that the whole team has made. The cider house walls are being finished with lime plaster, the bat lodgings are complete, the old stable has been beautifully restored externally so that it has a glow about it, and in the main house, the roof is off which has let in a great deal of light. 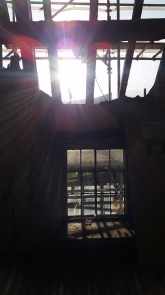 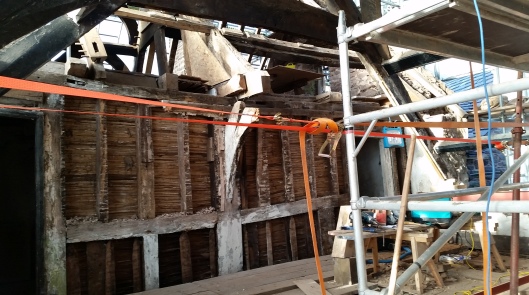 Walking around the house full of light, evoked a palpable shift in its personality; it was like a yawn and a stretch and a smile, like weight had been lifted and the house is waking up. Funny, being roofless not only affects the light, but also the sounds that can permeate the house, the birds above can be heard singing in all the rooms.

It’s obvious there is a great deal of pride and professionalism from the craftsmen at I. J. Preece (the restoration company undertaking the restoration work). Even unwanted debris is sorted carefully. I love talking to these knowledgeable people, they are really getting to know every inner and outer inch of Llwyn Celyn. 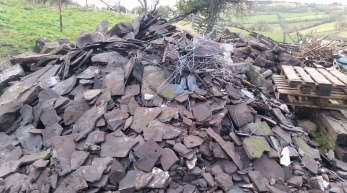 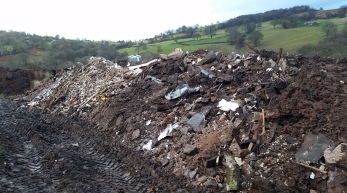 Before lunch I  recorded sounds of the giant tarp at the door of the threshing barn. It was making a dramatic drag on the slab floor, like an artificial lung; reminded me of the rubber lung we had in the bell jar for GCSE biology. It sounded like the barn was breathing.

After lunch I helped Kasia Howard, Engagement and Education Officer to plant two plum trees. I like doing hands-on things at the house, things that will outlast my creative residency. Nice to think there will be plums on those trees in years to come. It also gave me a chance to talk to Kasia who knows so much about many aspects of the house as building, as part of history.

On my last visit, I picked sloes and made gin so that I can take some other kind of sustenance from this magical place. 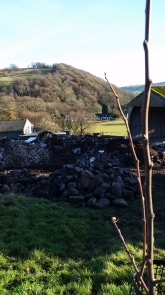 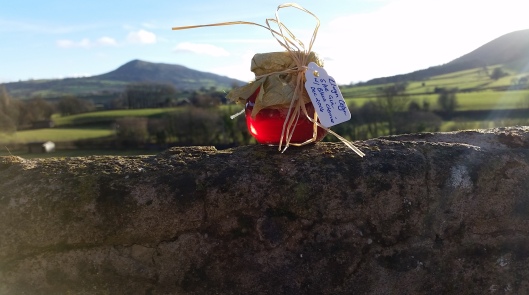 Gin made with Llwyn Celyn sloes

Just before I left, Llwyn Celyn artist-in-residence Toril Brancher arrived and we sat in the shed and talked about our residencies: output and process, and the tension between the two.

Like Toril I am gathering. For me it is sounds, snaps on my phone, metaphors, pieces of crockery from the mud. What Toril does well though, that I have to internalise, is to come to the house without imposing, just being, seeing what unfolds, trusting the process. ‘It’s quite profound’ she said, ‘what we are trying to capture here and we have to find the language to convey it.’

Yes, I think this will be more than crafting words, a direct narrative, I think I have to forget finished pieces of poetry (audio or page) and allow myself to feel what the house is feeling now it is more opened and open; perhaps what will permeate me if I am able to be this receptive will be far more meaningful.

I leave with these images lingering: remnants of the rook’s nest and a wide open door. 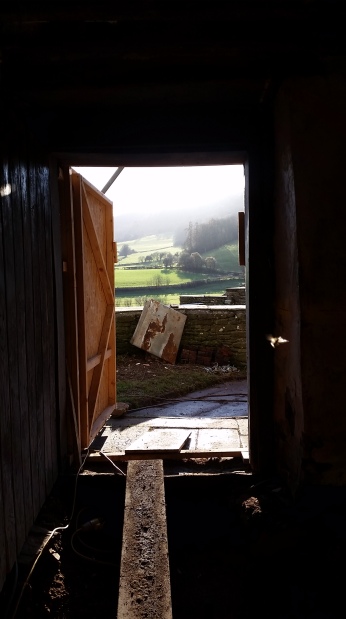 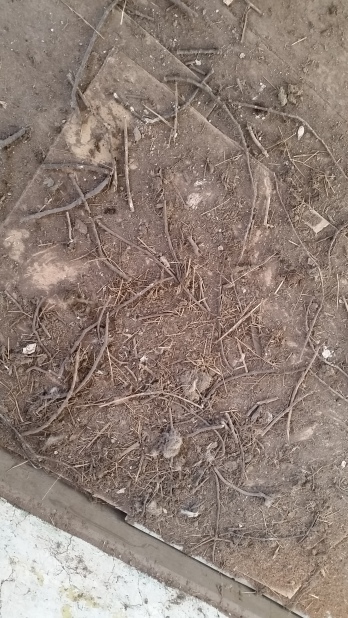 3 thoughts on “Peeling off the Layers and Letting in the Light: Llwyn Celyn”